Did you know that TOPdesk has no fewer than 10 million users and 5,000 customers? And that every day we aim to present them with software that is just a tad better than the previous version? That’s why we have developers – lots of them. And we’re looking for many, many more! TOPdesk colleagues Jalitha Wills and Elmer Jacobs explain what their Product Development Team, Phoenix, is working on.

Hello Elmer and Jalitha! How long have you been working at TOPdesk?

Elmer: “For me it’s already been 7.5 years. I once came to TOPdesk through the Summer Internship programme and applied for a job not much later. That’s how I ended up at Team Phoenix. I did, however, make a short detour by way of Team Barracuda, one of the many other Development Teams at TOPdesk’s headquarters in Delft.”

Jalitha: “But of course, he couldn’t do without us! Phoenix is a warm team where we like talking to each other. A lot! And Development as a whole has a really fun atmosphere. During the pandemic, we started playing remote board games on Friday afternoons and we still do that now, but in the office. I myself have been working at TOPdesk since 2010. I was even present when Team Phoenix was born.”

What exactly is the Product Development department at TOPdesk?

Elmer: “Product Development is a large, international department divided into several Product Cells, each with their own responsibilities. We deal with aspects of the TOPdesk software and development process like Product Delivery, Asset Management and Identity Management. Each Product Cell is made up of several Development Teams. They have names like Akupara, Izidor and Curiosity. And Phoenix of course! All the teams are multidisciplinary and include developers, designers, testers and a product owner.”

Jalitha: “This was different in the past. Back then, you had separate teams for programming, testing and design. What I like about our team today is that we work closely together and can brainstorm. The developers in our teams don’t just write code and nothing more. We come up with ideas about design, for example. For fun, we make everything pink in the beginning and then say, ‘It’s ready, right?’ Everyone’s input is valued. It’s true teamwork and it allows us to improve the quality of the software.”

Elmer: “At Development, we’re currently evolving towards a structure in which each team is responsible for specific
functionalities of the TOPdesk software. This creates a clear vision and specialism within each team and allows us to build professional solutions. And we match new colleagues to the team that best suits their experience and ambitions.”

TOPdesk has been around for almost thirty years. This means that over the years, a lot of people have worked on the software and a lot has changed. What does that mean for Product Development in 2022?

Elmer: “Did you know that TOPdesk has grown over the years into a product with around 2 million lines of code? Every developer at TOPdesk has a single overarching task: to make the architecture of that code completely future-proof. Right now, we’re in the middle of the transition from a monolithic architecture to a service-based architecture. This means we’re moving away from the situation where those 2 million lines of code are responsible for all TOPdesk functionalities. We’re now working towards a situation where each ‘smaller’ service will have specific responsibilities within the software.”

Jalitha: “You could imagine the current situation as a giant Jenga tower whose blocks are also joined together by wires. So, disconnecting a block also means untangling wires and making sure nothing falls apart somewhere else. It’s quite a challenge. But a really fun one!”

Elmer: “And ultimately it will create a more scalable and longer lasting product. Resources can then be allocated based on the number of customers using each individual functionality. As a result, we’ll deliver a more stable and faster experience to our customers, at peak and off-peak times alike, which in turn will help us remain a relevant player on the market. We’re always looking for new colleagues to help us achieve all this.”

The IT sector is still known as pretty much a man’s world. Do you have any female colleagues at TOPdesk, Jalitha?

Jalitha: “Absolutely! But when I applied in 2010, I was the only female developer at the Delft office! There were female testers and designers at the time, but of course they weren’t so deep in the code. Currently, around 30 percent of the developers at TOPdesk are women. That means we’re doing a lot better than the majority of tech companies worldwide. It feels quite balanced, because at TOPdesk there are of course also a whole lot of women in other positions.

In addition, TOPdesk is a place where you can feel comfortable as a woman or non-binary person. Everyone really is allowed to be themself. At Team Phoenix, we complement each other very well. Those who like to communicate with other teams, like Elmer and me, go ahead and do it. Those who prefer to keep their nose in the code can concentrate entirely on that.”

Team Phoenix falls under the Tasks and Workflows Product Cell. What are you working on?

Elmer: “Team Phoenix is a very customer-focused team that is centred around knowledge management. Within the TOPdesk software, we optimize the Self-Service Portal and knowledge items. As a result, customers can solve problems for their colleagues more and more effectively. They can store all knowledge about standard problems and their solutions in the portal and knowledge items, so that this information is easy to find.”

Jalitha: “In the transition to a service-based architecture, the knowledge system is one of the first Jenga blocks to be unplugged. After that, we can attach new applications to it. For example, a draft capability, or the option to make specific knowledge items available only to certain profiles.”

Elmer: “For this, we’re working with Team Cappuccino, who are responsible for Identity & Access Management. So, you can see that Development Teams are interconnected in a kind of web. At the Product Development department, we keep moving full steam ahead so that everyone can give their best in the right place, in the right team and in the right Product Cell.”

And what about ‘apenkooien’, as we call time given to developers for experimenting with their own projects or learning a new programming language?

Jalitha: “Ha ha, we’re not very good at that at Phoenix. In fact, we’ve blocked out time for it on Fridays, but if just one person gets on with our regular work, we’re soon all busy working on that again. It’s kind of a combination of a sense of responsibility and simply having a great desire to deliver successful projects.”

Elmer: “Our scrum master does like to try out new things with the team and we respond enthusiastically to that too, but we’re critical at the same time. That’s how we stay focused on the output. We also sometimes go to conferences about certain programming languages or our field in general. And for a while we even organized programming classes for colleagues who wanted to start with that. We should actually hold those again!”

Jalitha: “I was on the team that first started working with the scrum method. Part of the team was in Germany at one point, which was quite a challenge. That’s why we introduced theme days as a team-building exercise. That meant we were all dressed up as gangsters or characters from The Arabian Nights during video meetings. Hilarious! Photos of that still do the rounds sometimes.”

Elmer: “I went snowboarding in France with TOPsnow last March. There was an incredibly fun atmosphere there and you quickly got to know many colleagues from all different departments. Since then, we’ve formed a club that goes indoor snowboarding once a month. We even get lessons from one of our colleagues. The group gets bigger every month!”

What do you think is the main reason for developers to apply to work at TOPdesk?

Elmer: The room there is for personal development alongside your work as a developer. When I said at my interview that I might want to do a PhD in the future, I was encouraged to do so, while other companies didn’t want to hire me for that very reason. Once you’ve been working here a bit longer, you can also change roles – temporarily or otherwise – to experience the company from a different angle. At TOPdesk, we even get the time and budget for training and following other courses.

Jalitha: “That’s right, I find it incredibly valuable that, among other things, I can take a mindfulness course through 10 to Grow. And the work-life balance is also perfect at TOPdesk. Working from home for a day because you also have a personal appointment is perfectly normal.”

Would you like to join Elmer and Jalitha in making the TOPdesk software a little better every day and develop yourself at the same time? We’d love to help you find the Development Team that suits you best. Check out our vacancies and get in touch! Or would you like to come for lunch first? You’ll be very welcome at our office. 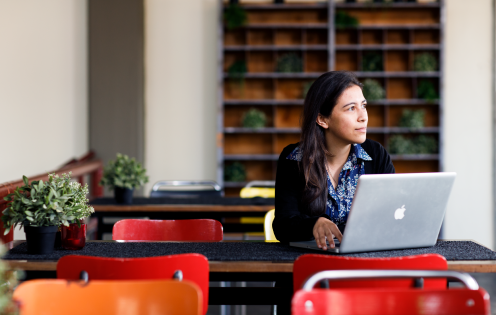 10 to Grow: how TOPdesk invests in your personal development 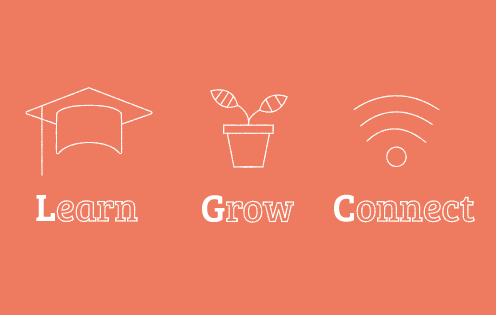 A complete starter programme for every new TOPdesker